“Patient-centered” is more than a buzzword at OB-GYN Associates of Cookeville. The nine-provider medical group is intentional about taking patient feedback to heart and using it to improve the practice. When their patients asked for a combination of traditional and alternative approaches to women’s health, they responded by adding nurse midwives to the practice. When patients began requesting appointment reminders, they took that seriously too.

Tina Holton signed on as their Practice Administrator in late 2017 and found their no-show rate was hovering just above the national average at 8.0%. She knew lowering their patient no-shows needed to be a priority.

“Patients were asking us for appointment reminders because they were receiving them from other appointment-based services. The combination of our no-show rate, the frequency in hearing our patients ask for a reminder, and how tightly we were managing our providers’ busy schedules meant we had to do something.” -Tina Holton, Practice Manager

The staff at OB-GYN Associates had never utilized appointment reminders. They were calling patients who failed to make their appointments however the process was inconsistent, time-intensive, and unreliable. The process was also dependent on one employee who eventually took maternity leave, halting no-show calls altogether.

Tina knew where to turn

Having worked with Relatient in a previous practice, Tina knew the power of Relatient’s appointment reminders to reduce no-show rates and improve workflows.

“I’m very fortunate to have worked with Relatient previously. I got reconnected with them right away and we saw a return on our investment within the first month. Now our patients can cancel from their phones and we are often able to reschedule them at that point. That frees up the current appointment for same day work-ins instead of lost revenue.” -Tina Holton

In addition to a 46% YTD decrease in their patient no-show rate, OB-GYN Associates has seen a 9.2% increase in appointments rescheduled. Patients that would have previously no-showed are put back on the schedule, keeping patients more current in their care and reducing non-billable hours for providers. 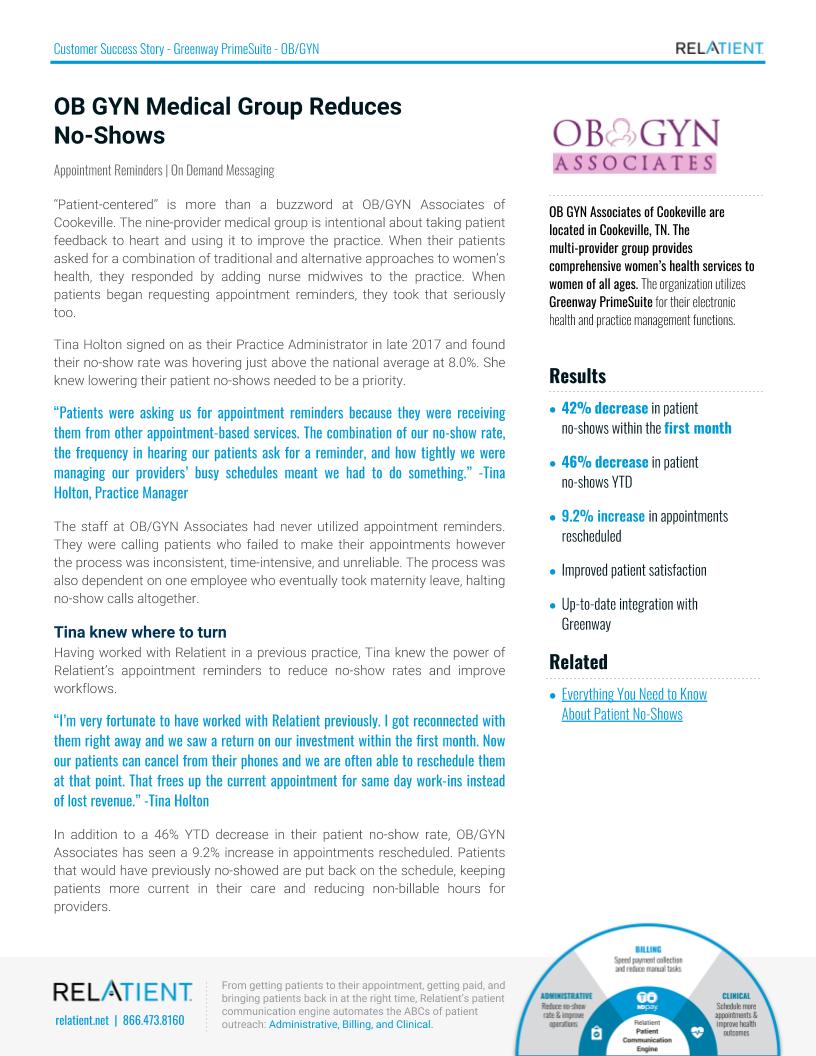 Get a free demo of Relatient’s patient-centered engagement software.

See why 10,000+ physicians trust us with their patients and businesses, and learn how we can help you:

Yes, I want a demo